I was born when Queen Victoria was Queen.  I lived in a house in Bowgreave, just opposite where the High School is now.      My father worked at Sandholme Mill and my mother kept a little shop and took in washing   and  baked bread for  neighbours.        There were seven of  us children and we  used  to  deliver the  bread on  our way  to school  at Bonds – I can smell it now!  Mother used to get up at five o’clock to bake it.   I went to school when I was about four or five; that would be about 1902.  I remember most of the nuns quite well, especially Sister Ambrose and Sister Philomena.

They were always very kind to us and never used a cane, not that I can remember and certainly not on me.  I remember the way the classroom used to slope up to the back, with a passageway up the middle  and benches on either side.  We used to look down on the teacher.     Boys and girls used to sit together, mixed up, but we had separate playgrounds, the boys in one and the girls in another.  Best of all we used to like playing dolls’ houses.  We played in the coal shed.  Some of the bigger girls put up curtains and we had our dolls there.  We didn’t get dirty – there was plenty of room. 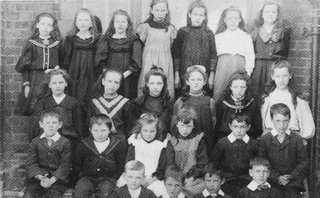